What methods are used to eliminate the deformation of the car body? 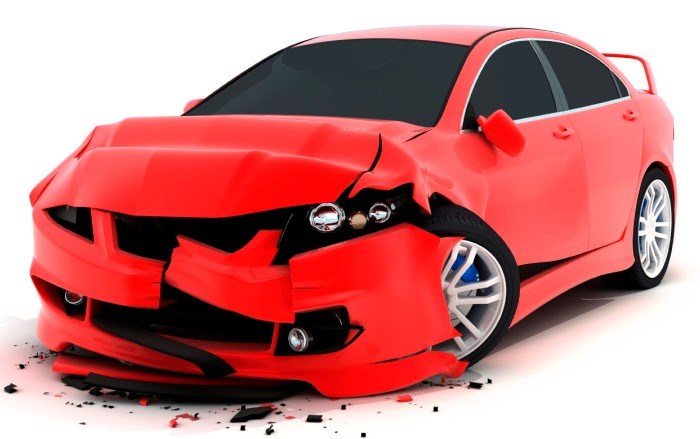 The deformation of car body elements has always been relevant. This unpleasant phenomenon has been accompanying the owners of equipment since the first car appeared. And if earlier this issue was not given too much importance, then on a modern car, changing the dimensional parameters of the body can adversely affect both the ride comfort and the safety of its operation. This issue has a second side of the coin, which requires separate consideration. It consists in the fact that developers deliberately make some individual parts of the car body easily subjected to deformation. Why is this needed? We look in the subsection on the passive safety of the car.

So, what is the deformation of car body parts? Deformation refers to any violation of the size and shape of the body, which occurs as a result of any physical impact on the car. It may be a small pebble that flew out from under the wheels of an oncoming car and left a small dent. There are frequent cases of falling into the body of a car past flying birds, branches falling from trees, and so on. The most unpleasant and serious deformation occurs due to a minor or major accident. Such damage often makes the car body completely unusable, and the owner has no choice but to hand over his horse for scrap.

It does not matter how the deformation occurred, the main thing is that the further operation of a car with a damaged body can be not only uncomfortable, but also dangerous for the driver and passengers.

Due to the violation of the dimensions of the car body established by the manufacturer, the correct operation of the suspension, steering and other systems is disrupted. Therefore, the issue of deformation has always remained important and requiring special attention from the motorist.

Conventionally, damage to the car body can be divided into several degrees, which are classified depending on the complexity of the deformation. The simplest deformation occurs due to impacts on the body of small foreign objects or collisions with small obstacles. Such damage has a small area, it is quite easy and inexpensive to repair. Usually everything ends with straightening or pulling with simple fixtures. 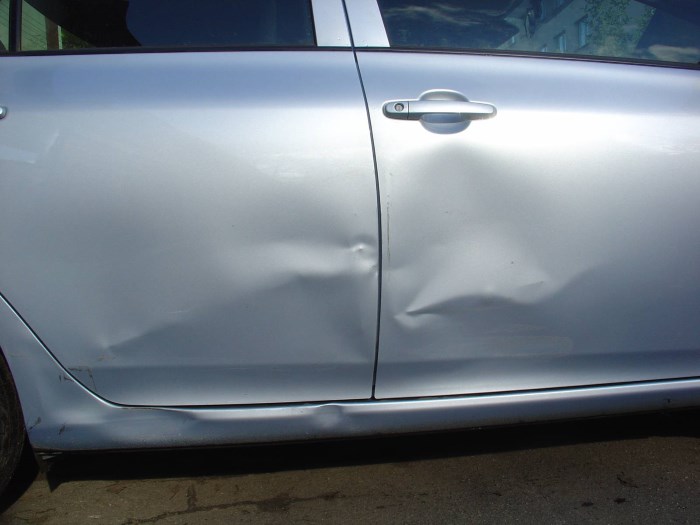 More serious deformations of body parts occur when hitting large obstacles or as a result of prolonged and careless operation of the car. In the first case, damage can affect one or more body parts at the same time, which greatly complicates the repair and increases its cost. In the second case, the deformation may not be visible, but it is felt by the driver due to the uncomfortable ride and is noticeable due to incorrect suspension operation. Such damage leads to increased tire wear, deterioration in vehicle handling, and carries a special danger.

The most difficult type of deformation of the car body occurs as a result of major accidents. In this case, not only the outer parts of the body suffer, but also the supporting structures designed to stiffen the car. In some cases, after an accident, the car can no longer be restored, as the overall body structure has been violated, and repair will be impractical.

Even if it is possible to restore the overall geometry, the rigidity will be irretrievably lost, which by itself will make the further operation of such a car unsafe for the driver and passengers.

With all types of body deformation, there are special ways to restore the original appearance of the car. Depending on the complexity and degree of damage to body parts, the methodology and sequence of restoration work is determined. These questions can be found below. And before that, it is worth considering the question of why car designers deliberately make the car body so easily deformable. 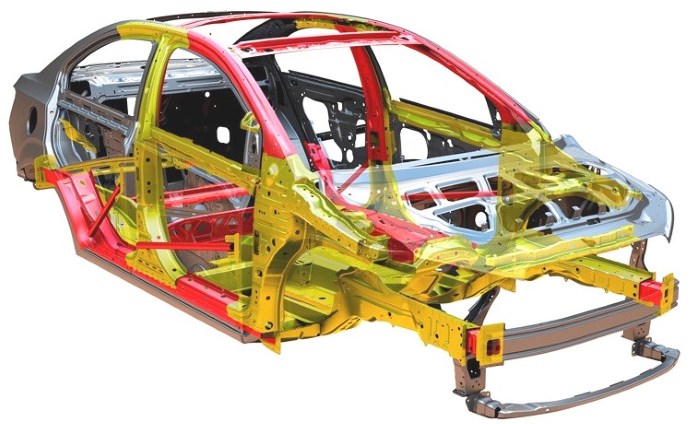 As mentioned above, the deformation of body parts can bring not only trouble, but also benefits. The thing is that the car is designed in such a way that in case of collisions in serious accidents, the body parts, deforming, take on a large share of the kinetic energy. This allows you to remove the impact loads from the part of the car body in which the driver and passengers are located. This greatly reduces the inertial forces and slightly increases the time of a complete stop of the car. In most cases, this fraction of a second or millimeter is enough to avoid disastrous consequences for the participants in the accident.

In the old days, this issue was not given much importance. The car body was made strong and durable. However, in accidents, such cars were extremely unsafe. The rigid body did not extinguish the force from the impact, transferring it to the driver and passengers. Over time, cars began to be designed with this nuance in mind. And the low strength of the body works for safety paired with seat belts and airbags. All this has been repeatedly proven in special crash tests, which dispel the myth that the manufacturer saves on metal.

Today's car design is completely designed with the expectation of lightweight deformation of the front and rear of the body. This is due to the fact that most accidents result in damage to these particular parts of the car. According to statistics, more than 95% of accidents destroy the front and rear of the car. The side parts are not so often hit in accidents, although they are also designed with reinforced rack structures. According to the same statistics, only 5% of accidents fall on the sidewalls. 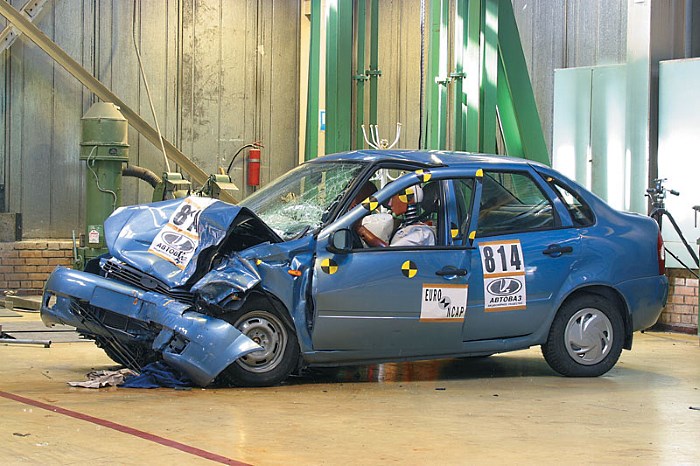 As a result, it turns out that a modern car is deliberately made easily deformable by designers. Everything is calculated in such a way that, with proper and careful operation, body parts retain their geometry for quite a long time. Only periodically, after a few years, it is required to check the geometry and restore it if necessary. If the car gets into an accident, then the deformation of the body parts makes it possible to protect those in the cabin from excessive damage and injury.

Elimination of small deformation by straightening

The smallest deformations, which have a small area, are corrected with the help of elementary straightening. For this, special tools are used in the form of rubber hammers, levers and other things. Such repairs do not require special qualifications, but must be carried out with great precision and accuracy. It should be noted that parts that were previously damaged by corrosion are absolutely not amenable to straightening. In such cases, it is more advisable to completely replace the part or carry out additional removal of corrosion by applying patches or putty.

Straightening is used as a stage of restorative repair and in more serious cases. In case of severe damage to the body, complex restoration is used, and straightening plays an important role in it.

Those parts of the body that could not be pulled out with special equipment are straightened manually. Straightening is also used after parts are drawn, which allows for higher accuracy in restoring body geometry. 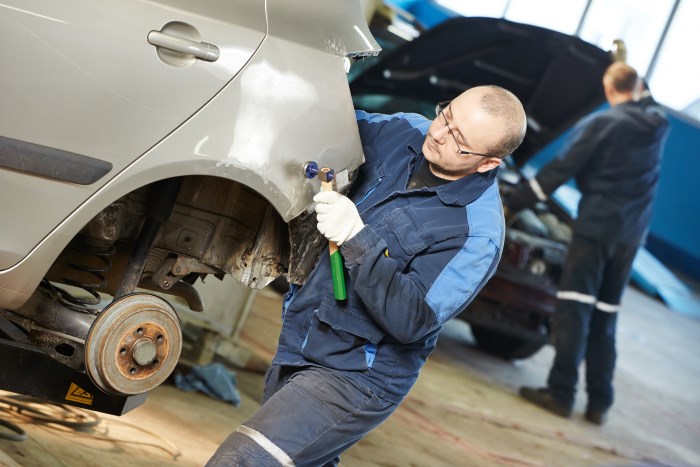 Separately, it is worth mentioning the straightening of car body parts using German technology, which does not require subsequent paintwork. It is applicable in the presence of damage, when the paintwork remains intact, and there are small dents on the surface of the body. This work requires special equipment and fixtures, as well as the appropriate qualifications of the repairman.

Elimination of deformation of the body by pulling

A more complex procedure for restoring a deformed car body is pulling. Such repairs require expensive modern equipment, which not every body repair shop has. For such a repair, not only pulling equipment is required, but also measuring.

Western manufacturers produce measuring and extraction equipment that uses computerized measurement of body geometry with extremely high accuracy. Measurements of control distances between body points are carried out using sensors that transmit their position in space to a computer.

The program receives a signal and, based on the data in the database, makes a summary of the state of the geometry of the car body. These measurements are very accurate and cannot be compared with the determination of geometry violations by eye, or using mechanical measuring instruments.

Then the specialist decides on one way or another way to fix the problem. Imported equipment allows you to almost automatically correct most of the shortcomings on the car body. And only in case of non-standard or very serious damage, an adjustment of the program operation is required. You should also pay attention to the fact that such equipment works for quite a long time on the restoration of each detail. This allows you to gradually change the shape of the metal without damaging its structure.

Alignment of the body geometry is carried out using special clamps and devices installed in certain places. The pulling parts are hydraulically driven and computer controlled. This provides the highest precision work that a person cannot do.

In addition to high-tech equipment from an imported manufacturer, hand tools can also be used to pull out deformed body parts.

They will not provide the same accuracy as computer hardware, however, they are much cheaper and easier to use. But, nevertheless, the experience and skills of the repairman are more than necessary.

Repair of body deformation after a major accident

As a result of a major accident, several body parts are usually damaged at the same time. Restoring a car in such cases takes a very long time and requires a lot of money. If, nevertheless, a decision is made to restore an excessively deformed car, then all methods and methods are applied in a complex manner.

To begin with, all parts that cannot be aligned or pulled out are completely removed. Such parts may have metal breaks, a complete change in geometry, and so on. That is, it will be easier to completely remove such parts and replace them with new ones. If the part is non-removable, then the area is replaced by pieces of metal, which is selected according to the structure and other parameters. 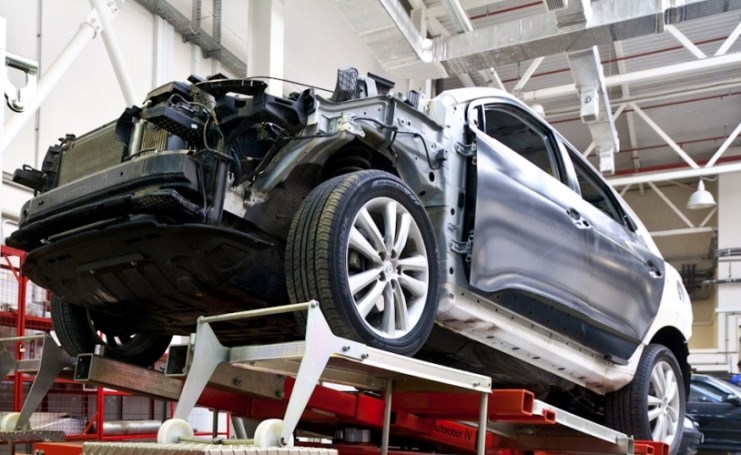 When all parts that are not subject to straightening or stretching are removed, the body is leveled using the methods described above. After the straightening and pulling procedures, new parts are installed, which have been replaced. They are also fitted to the overall geometry according to the set dimensions between control points. After the body assembly is completed, a control measurement of geometric parameters is carried out, and the car is given for painting.

I accidentally found this article, which I immediately want to note, here is a detailed description of all types of car deformations and various options for repairing damage. At the expense of body rigidity, which plays a negative role in an accident, I completely agree. Softer bodies dampen the force of impact from a collision, and do not transfer everything to the driver and passengers.

Very useful information, I never thought why the body is so easily deformed. After a minor accident, it was necessary to eliminate a small deformation, this was easily done in a car service by straightening.

I corrected minor deformations from a friend in the service by pulling. Relatively fast and efficient.

and an engine is installed in the body, and wheels)) to transport our 5th point