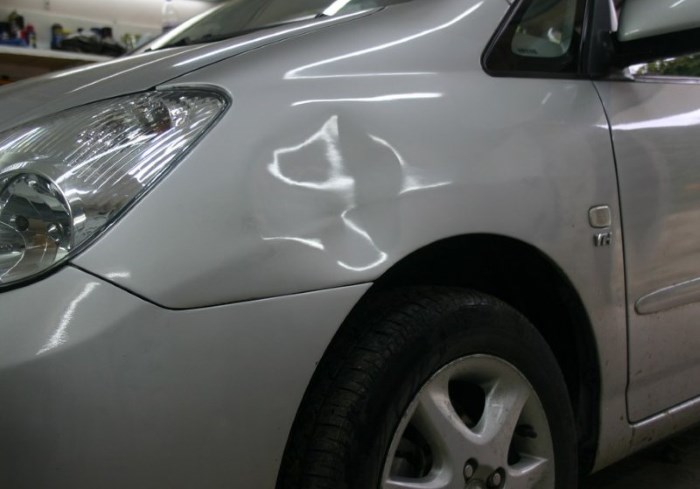 Damage to the car body, even if insignificant, is a rather unpleasant phenomenon, many car owners are familiar with it firsthand. An unsuccessful entrance to the arch or a drive into the yard, an obstacle that appeared out of nowhere in the form of a pole, a curb or a garage door - all this is far from a complete list of causes of damage to a car. Removing a dent on a car wing is a time-consuming process that requires careful preparation and extreme concentration.

First you need to soberly assess the degree of complexity of the damage. Most often, if the dent is small, it is quite within the power of most car owners to straighten it out. For more serious defects, it is better to contact a car repair shop.

If the choice fell in favor of an independent solution to the problem, you should decide on an algorithm of actions in which it will not be so difficult to straighten the dent. There are repair methods, which include:

After the dent removal method is selected, you need to prepare certain tools: 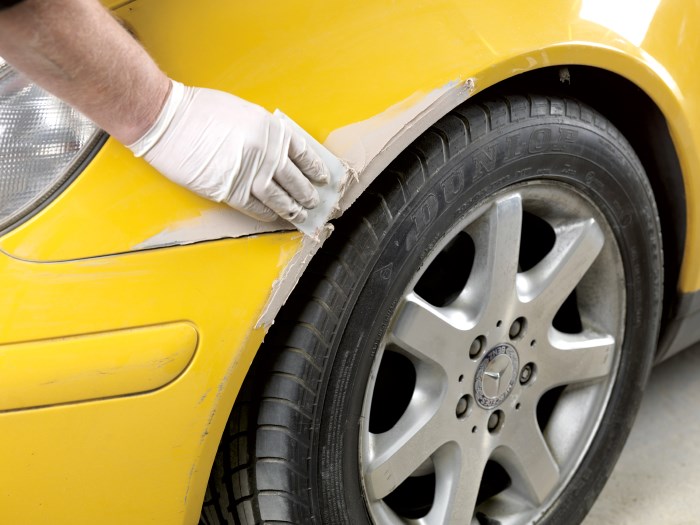 The damage surface is cleaned with fine-grained sandpaper or a diamond bar. In the process, you should capture a small area of ​​\u200b\u200bthe whole coating near the dent. This will ensure better adhesion of the putty to the metal. The procedure should be carried out as carefully and carefully as possible in order to completely remove the previous coating from the damaged surface.

The next step is degreasing the treated surface with any reagent. Then, with a rag, remove the remaining moisture and particles of paint.

After stripping and degreasing, epoxy automotive putty is used. It must be applied to the deformed area, slightly capturing entire areas.

You should not try to make an absolutely flat surface the first time, since the putty that has dried and slightly shrunk after that will still be subject to grinding.

Drying time must be given to the material in accordance with the attached instructions. After complete drying with a coarse cloth, the treated area is polished. The end result should be a smooth surface without blemishes or bumps. 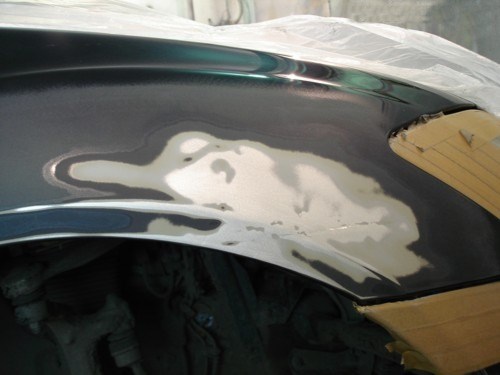 The final step is the application of the dye. Depending on the skills and abilities you have, you can do this with a roller, a brush or a spray gun. The painted surface can be dried using the natural drying method or, if possible, using a drying chamber.

If you cannot fix the dent in the described way, you can use the second method and try to squeeze it out.

A pretty real way to fix the look of a dented car fender. In this case, other tools will be needed to work with damage: 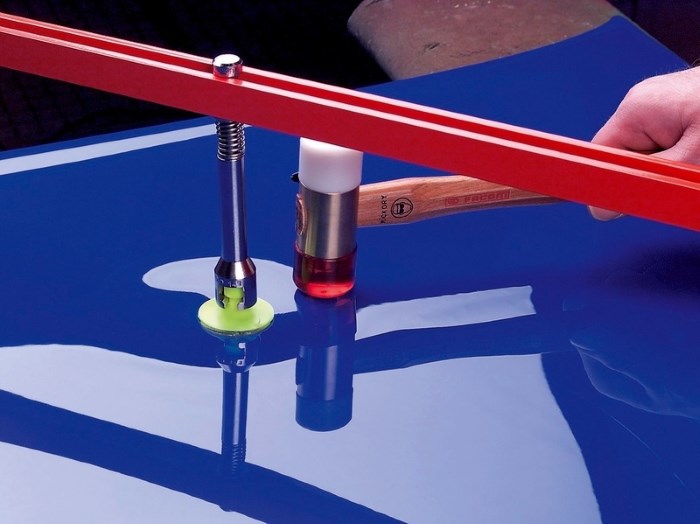 It is not possible to completely straighten the wing by straightening. The reason lies in the stretching of the metal, which does not allow the material to return to its original position. It will improve the appearance of the wing by reducing the level of the dent by at least 2-3 mm below the total surface.

In order to remove the damage, you need free access to the deformed area from all sides, in particular, from the back of the car body. Using a wooden mallet, straighten the surface of the wing from the smallest to the deepest point of the dent. You can not use a conventional hammer, as it can damage the surface even more.

In the process of work, a wooden block is applied on the reverse side of the surface. This will help prevent excessive bending of the metal in the opposite direction.

In addition, you should carefully work with a mallet: if you hit a flat area with a hammer, new bumps will appear. There are frequent cases when it is impossible to access the reverse side of the damage. Then, in the deformed area, a number of small holes should be drilled and self-tapping screws screwed into them. After that, with pliers, you can try to pull the screws by the caps, thereby pulling out the dent.

The final stage is the treatment of the deformed surface with a primer (method 1).

Not every car owner knows that some of the dents can be pulled out with a magnet. The main thing is to use a sufficiently powerful magnet. The essence of the method is to bring it to the edge of the damaged area and pull it towards you. The magnet must be moved successively over the deformed surface until it gradually levels off.

This method is good because it helps to prevent possible damage to the paint. In cases where the paint on the leveled area is still damaged, it must be completely removed. Along the way, it is worth capturing a few centimeters around the perimeter of the deformed surface. As a result, it remains only to putty, prime and paint the straightened area.