How to straighten a damaged bumper with your own hands: home methods 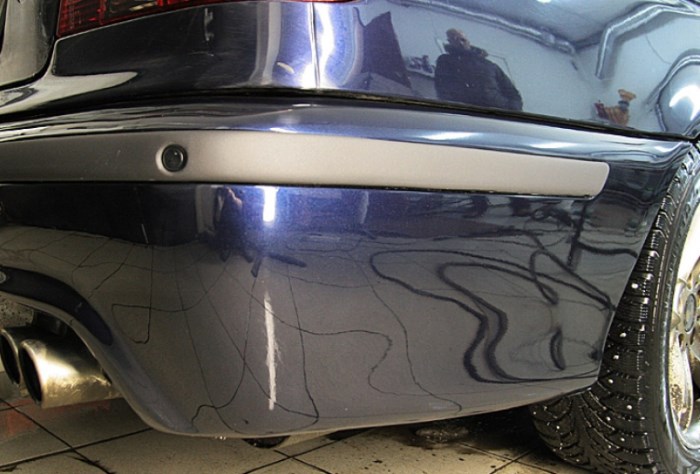 One of the most common situations, especially in the winter season, is the appearance of dents on the car bumper. They arise in the process of "collision" with snowdrifts. Even a small such interaction can result in a decent amount that you will have to pay in a car service for its restoration. But straightening a plastic bumper is easy with your own hands. You need to purchase the necessary tools and familiarize yourself with the stages of the work.

Removing a bumper dent is done using the following tools:

In addition to tools, you should prepare a place where you will straighten the bumper with your own hands. It is desirable to carry out work in a garage or box, where the temperature is maintained at 20-30 ° C.

Before you straighten the bumper, you need to know exactly what it is made of.

If the bumper material cannot be heated, then it will be problematic to squeeze out the defect with your own hands, and in this case it is better to turn to body repair professionals for help.

For example, you should not heat the existing welded seam on the bumper, and it is also unacceptable to expose the fiberglass part to heat.

To eliminate the dent, you must first dismantle the bumper and slightly warm the surface with a building hair dryer. At the same time, water is heated in the kettle to a temperature of 40 degrees. Heated water is poured over not only the defect itself, but also the area with a radius of 20 cm around it. After that, you need to heat the water again to a temperature of 50 degrees and repeat the procedure. 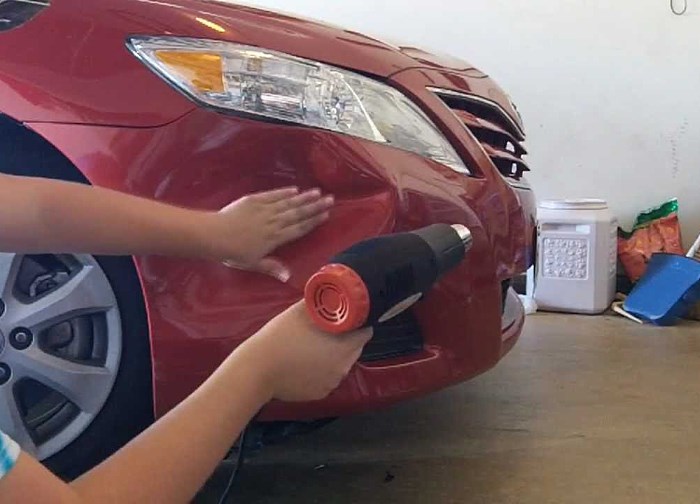 Do-it-yourself bumper dent removal should be started immediately to prevent the water from drying out. The magnet must be brought to the surface and moved in different directions. Moreover, even if the bumper is plastic, it will be magnetized, since the paint applied to it contains a large amount of metal particles.

From the inside, gently press the dent with our hands to straighten it to its previous position. So you can help the magnet and at the same time distribute the force over the entire surface of the bumper. To remove a dent, you do not need to press too hard with your hands, as you can damage its coating.

After the recovery is fully completed, do not immediately remove your hands. You should hold the straightened surface for several minutes to fix the new shape.

But this restoration work is not over. To completely remove the dent with your own hands, you need to heat the water again to a temperature of 35 degrees and pour it over the bumper. This procedure is carried out several times, and each time the temperature drops by 8 degrees. When the water temperature reaches 15 degrees, the bumper is left to dry in a cool and dry place. Here it must lie for 48 hours, after which it can be re-installed in its place. 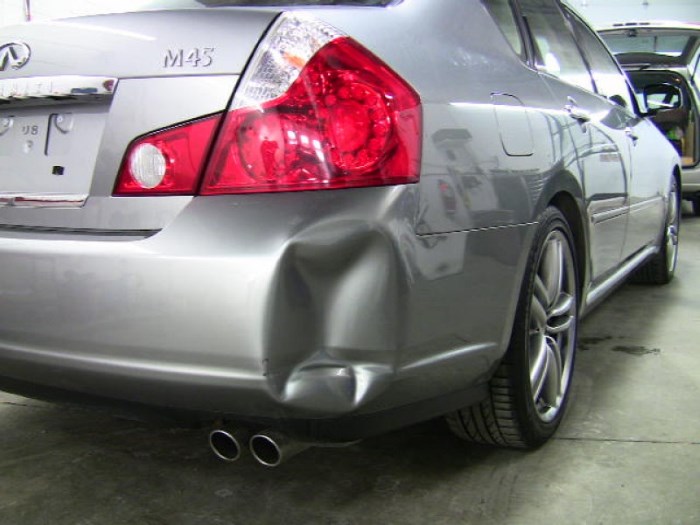 It happens that deeper dents appear on the bumper than those that remain after contact with snowdrifts. The reasons for their occurrence can be different, ranging from children playing the ball, ending with accidents on the roads. To level such a dent, it is not at all necessary to contact specialists. All work can be done by hand.

There is an effective and simple method. To straighten the dent, you will need a powerful hair dryer, which heats up the area around the damage for a couple of minutes. Next, a heated dent is sprayed with compressed air until traces of frost from liquefied air appear. After that, you should wait for the frost to disappear and observe the self-straightening of the surface. It remains only to wipe the dent until a natural shine is formed.

So, you can always fix a dent that has appeared on the bumper with your own hands, which will save significant money.

About the magnet is funny!

If an ordinary magnet, then yes, it's funny. And if you take a 500 kg magnet, the effect is impressive

Then you can stay without a bumper at all