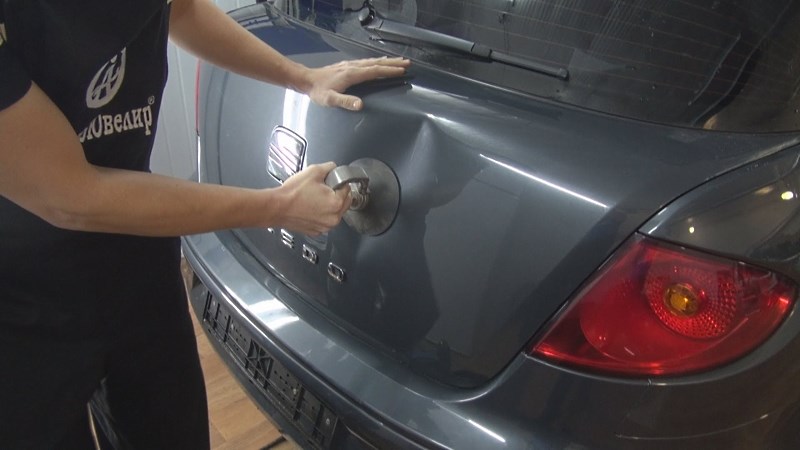 There are several ways to straighten dents. The traditional option involves straightening, puttying and repainting or replacing the damaged part. However, if the paintwork is intact, repairs can be greatly simplified by using the paintless dent removal equipment discussed below.

This alignment technology can be used for any metal car body parts. The main condition for leveling dents in this way is the integrity of the metal and paintwork. That is, on the damaged area, the presence of metal breaks, cracks, chips and other paint defects is unacceptable. However, minor damage such as scratches may be present and should be repaired by polishing.

Such a paintless dent repair tool is used for mechanical alignment from the inside. As a lever, you can use an elongated pin or a flat bar. The technology under consideration is based on differential pressure. The principle of work is to extrude the washed area from the back side with a lever placed in the technological hole. When the material returns to its original place, a click occurs. You need to press gently and smoothly, controlling the appearance of edges and peaks. To straighten them, a fluoroplast chipper is used.

However, since this method is associated with penetration into the car, its scope is limited, since not all parts of the body can be reached with a lever through technological holes.

This is a specialized tool kit for fixing paintless dents, including an applicator, glue and a mini lifter. Such a specialized kit is used for external straightening of dents. Its basis is a device in the form of a bracket with two rubber tips. In addition, the set includes glue, a gun, a set of nozzles.

The pre-damaged area of ​​the car is degreased. Then heated glue is applied using a gun to one of the nozzles (also fat-free) and set in a clockwise circular motion in the center of the dent. In this case, excess glue protrudes through the holes in the nozzle. The hardening time is 2 - 3 minutes. After it dries, the dent is pulled out with a mini-lifter - a bracket is installed on the nozzle and it is wound with a lamb until the defect is completely straightened. Upon completion of work, the device is left on the work surface for 5 minutes. At the end of the work, the surface is cleaned of glue.

There are other equipment for removing dents without painting by this method. For example, a piston is used in the same way. It is also glued to the damaged area and the dent is straightened by pulling. It is also possible to use a non-professional tool, such as a set of suction cups. The technology of their application is the same.
The adhesive method has a much wider scope, since almost all dents can be straightened from the outside. At the same time, the work is very simple to do with your own hands.

The technology of using vacuum suction cups differs from the aforementioned suction cups fixed on glue, since this equipment is installed on the working surface by the vacuum method.

The pre-damaged area of ​​the car is cleaned. Then a suction cup is installed and a vacuum is created in it with a pump. Finally, the pump hose is disconnected and the dent is pulled out. Upon completion of the work, they get rid of the vacuum by opening the valve and removing the suction cup. This technology compares favorably with the adhesive method by the absence of the need to clean the body after repair.

Such equipment is used when straightening dents using PDR technology. The set includes many hooks that differ in shape, length and bend of the working part. In addition to them, you will need a building hair dryer, a plastic gasket called a punch, and a mallet. It may be necessary to dismantle the inner lining and adjacent parts of the car before starting work. On a pre-cleaned working surface, the stress of the metal is relieved at the bending points. Then the damaged area is heated to 40-50°C. The edges of the bend are lightly tapped using a drift to avoid damaging the paintwork. Alignment is carried out by pressing on the damaged surface from the back. For this, a lever is selected depending on the conditions for the location of the defect, it is inserted into the technological hole and, turning the handle, acts on the surface. Professional kits are equipped with polymer wedges that are placed under the hooks to prevent damage to parts. The technology under consideration is the most difficult to do-it-yourself repair, as it includes various repair methods. It is usually used to correct complex and extensive defects.

This tool is used to straighten dents by pulling. Put a rag under it so as not to damage the paintwork. The magnet is moved from the edges to the center of the dent, slightly pulling.

Hairdryer and compressed air can

The use of such a set involves a thermal method for straightening dents. It is based on the desire of the metal to return to its original shape under the influence of temperature. First, the damaged area of ​​the car is heated with a building hair dryer, and then air from a can is directed onto it. In this case, the alignment of the metal occurs. When straightening large dents, this operation will have to be carried out at several points. Moreover, their location is not chosen randomly, but depending on the shape of the defect. So, for round dents, the points are located along the radius, and for oval dents, along the narrow side. If there are rigid elements in the defect zone, the alignment begins with them. This method does not always allow you to completely straighten the damage, therefore, for complete straightening, use a mallet with a rubberized substrate material to protect the paintwork.

Also, among other things, you will need a set of protective equipment in the form of gloves and a mask, since these works are associated with high temperatures (300 - 650 ° C).

There is also an option to perform repairs by this method using household materials. So, a gas burner is suitable as a heating tool, and water can be used for cooling.

Set of rubber mallets and anvil

This equipment is used for tapping dents from the back side, and the anvil is placed outside to avoid bending the metal in the opposite direction. Percussion starts from the center of the dent, moving to the edges in a circular motion. The force of blows should be controlled, since its excess can lead to thinning of the metal. In the absence of access to the damaged area, a set of hooks is used.