Learn how to wrap your car with vinyl wrap 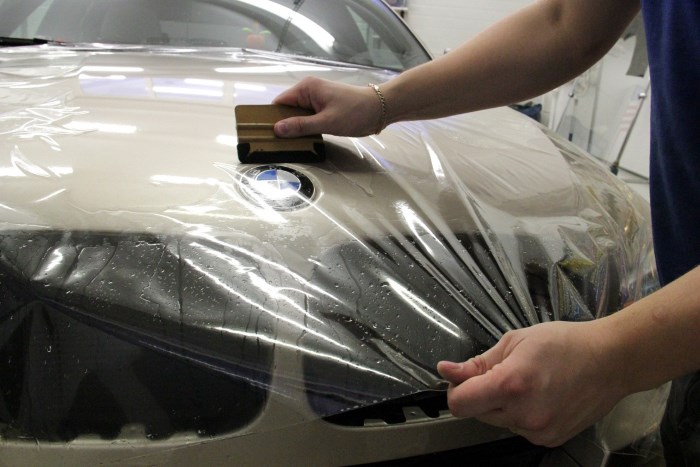 There are many ways to give the car an individuality, and this can be successfully combined with the protection of the body from the destructive factors of the external environment. In this article, one of them is considered, namely, hauling with auto film.

Films are very common, which is explained by the following properties.

Therefore, you can further save on the involvement of professional specialists. In addition, an important feature of the film is that it can be considered both as a main and as an additional coating. This is due to the fact that this material can be dragged over the entire surface of the body, but at the same time it is applied without removing the paintwork over it. Thanks to this, covering a car with a film allows not only to change its design, but also to protect both the body and the paintwork material.

The application of the film protects the paint or varnish from chips, scratches and fading, and the body receives additional protection from moisture and chemically active substances. And in case of damage, the material in question is easy to replace, in contrast to restoring the paintwork.

The service life of a vinyl film is 5-7 years. Car wrapping film has a wide range of applications. The sticker of these materials is used as a protective measure, as a tuning, and also to tighten the defects present on the body. That is, a film sticker is a functional external tuning. 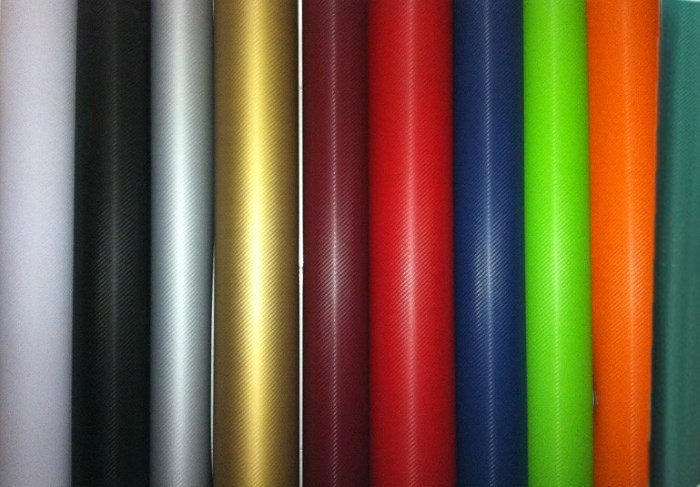 On sale are three options for film materials for a car that differ in performance properties.

This is the most common option among the materials under consideration, such a film is protective. Pasting it is used to prevent the formation of chips and scratches on the paintwork. Materials of this type consist of PVC and polyurethane. Depending on their ratio, PVC film, PVC with the addition of polyurethane and polyurethane material are distinguished. Unlike PVC, the polyurethane version is characterized by a large thickness, which makes it impossible to stick it on surfaces of complex shapes. PVC film can be glued on the entire body, due to its high elasticity. Combined PVC-PU material is an intermediate option.

This material combines the functions of protective and decorative films. This is the most inexpensive option, but most often it is applied to individual parts of a car, such as a hood, mirrors, spoiler, handles, taking aesthetic properties as a basis. Although, if you paste over the entire car with a carbon film, it will look very impressive, because in appearance, due to the presence of texture, it quite reliably imitates carbon fiber, as you can see from the photo and video. 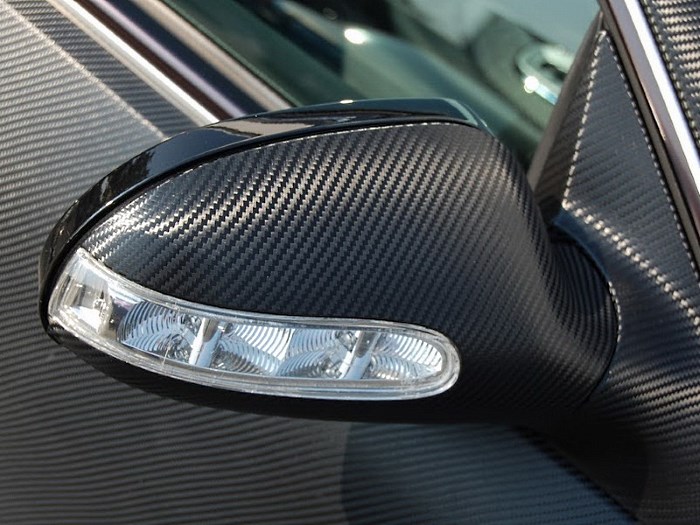 Just like carbon, it is both protective and decorative. In terms of the ratio of operational parameters and aesthetic qualities, this is an intermediate option between the materials discussed above. Films of this type are the most versatile in terms of design, as there are many color options, as well as several types of textures such as glossy and matte. Moreover, there are options that mimic airbrushing. The variety of vinyl films can be judged by photos and videos.

To choose which film to make tuning, it is useful to read reviews, watch photos and videos.

In order to wrap a car with a film, you will need the following tools: cutting tools, such as scissors or a clerical knife, an industrial hair dryer, two spray guns, a squeegee (a tool that looks like a spatula that removes air from under the film). In addition, you will need materials such as isopropyl alcohol and its aqueous solution in a ratio of 1: 3, a soap solution (can be made from shampoo in a ratio of 3-4 drops / 1 liter).

In addition, you need to prepare the workplace. It should be borne in mind that wrapping a car with a film requires a clean room.

These works should not be carried out outdoors, as in such conditions there is a high probability of dust entering the working surface, which will lead to the need for correction.

It is also desirable that pasting is carried out in warm conditions. The preparation of work can be studied from photos and videos, in addition, it is advisable to find an assistant, since it is difficult to cover the car body alone. You should see photo and video examples of the joint implementation of these works. 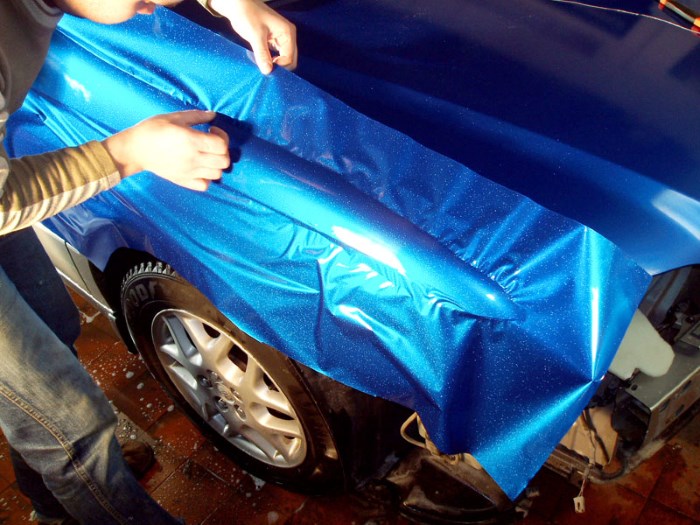 Next, tuning is considered on the example of a matte vinyl film.

Matte film wrapping begins with cleaning the car by washing. To do this, use a soap solution. It should be taken into account that any particles remaining on the surface of the body will appear on the film after the pasting is completed. Therefore, washing must be done very carefully. After that, degrease the work surface with alcohol.

Further, or before the gluing of the matte film has begun, it is necessary to cut the material into fragments corresponding in shape and size to the body elements. Since performers who do not have experience in these works do not always succeed in wrapping the car with high quality the first time, you should purchase a film with a margin. After that, you need to fill the spray guns: one with soapy water, and the other with alcohol.

Next, the soap solution is sprayed onto the pasted body element and the film is wetted in it. Then the material is separated from the base and applied to the body fragment. It must be tightened gently, but quickly, so that the applied solution does not have time to dry. After gluing, the film is smoothed with a squeegee, blown with a building hair dryer. At the same time, it is necessary to set a not very high temperature on it so that the material does not melt, but warms up well. Heating will provide a tighter fit of the film to the working surface, which will fit the body elements, excluding the possibility of air bubbles forming under it. 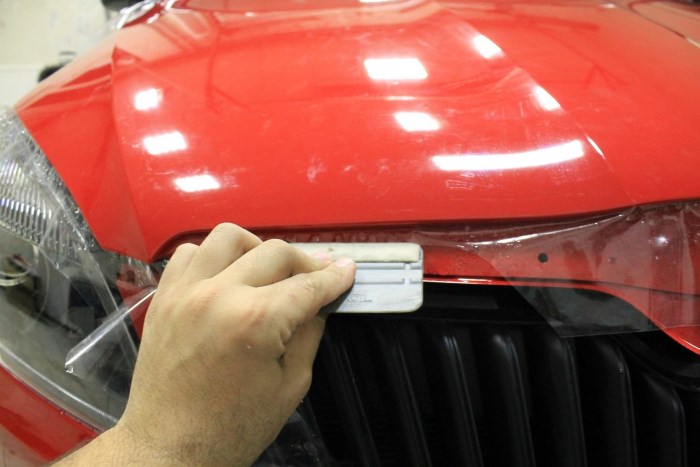 If you plan to tighten the car with a matte film to hide damage, you must pre-treat them, otherwise they will appear in the form of depressions. Therefore, it is necessary to putty and sand the defects, and treat the corrosion with a primer.

It is possible to stick a matte film on the paint, although some experts recommend treating it with an abrasive paste before starting application.

Small elements, like handles and mirrors, are pasted over separately from the car, that is, you first need to remove the handles, which then clean them.

The technology of pasting is the same. You can clearly see how to do such tuning in photos and videos. The material protruding beyond the handle is cut off, and after pasting the car with a film is over, it is left for a day, and it will be possible to wash it manually after 1.5-2 weeks.