Which car color to choose? What color is the most practical and safe 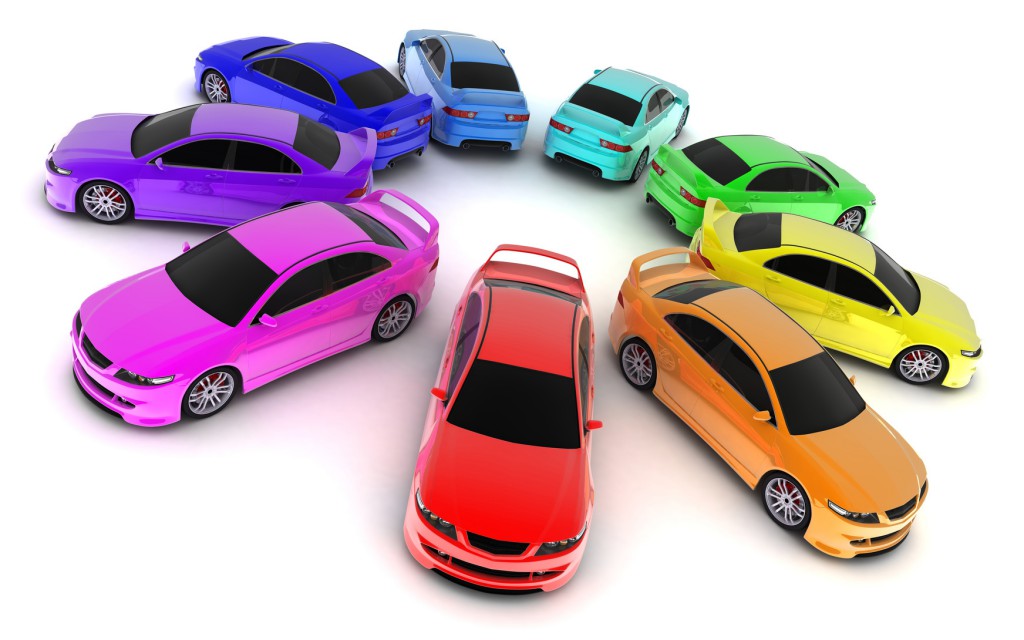 Color selection is the easiest way to personalize your car. This type of design is not tuning, but at the same time it allows you to show the character of the owner. Today we will consider what is the best color to choose for a car and what factors should be taken into account.

According to psychologists, it is possible to judge what character a person has based on the color of his car.
White. This is a calm and neutral shade, in connection with which the cars painted with it are chosen by neat people who follow the rules of the road. Their character is distinguished by generosity, honesty, justice. In addition, it is believed that this color of cars is chosen by people holding high positions.
The black. Psychologists believe that insecure people with a gloomy perception of life choose this color for a car. Their main features are sharpness and irascibility. Black cars are more likely to be involved in accidents.
Gray. Like white, neutral. It is chosen for a car by people whose character is distinguished by secrecy, prudence, incredulity, uncertainty. Their driving style is calm.
Red. Such a bright color is used for a car by people whose character is distinguished by sociability, courage, will, authority, impulsiveness, aggressiveness. They also have an aggressive driving style. Since red is a danger signal, cars painted with red are subconsciously perceived negatively on the roads.
Yellow. This shade of the car is rare. It testifies to the intelligence, sociability, calmness, adaptability, phlegm of the owner.
Orange. This color is considered less catchy, but more expressive than yellow. People who choose it most often have intuition, but are prone to dishonesty. It is also very rare.
Green. Natural color. The owners of cars painted in it are most often serious, practical and busy people. They drive calmly and consider the car as a means of transportation. However, at the same time they are considered prone to rash maneuvers and frequent changes in driving style. It is also believed that the green color allows you to assert yourself, so it suits insecure people.
light green. Despite the fact that this color is close to green, other people use it for cars. Their character is powerful. At the same time, they are considered stupid. On the road, drivers of such cars are also aggressive, often changing their driving style.
Blue. The main features of the owner of a car of this color are spirituality, purity of thoughts, melancholy. Usually it is chosen for cars by mature people.
Blue. This color is used for cars most often by women.
Brown. It is the color of conservatism and stability. For cars, it is chosen by confident people who follow traditions and family values.
Pink. Mainly female version. The owner of a pink car is distinguished by such features as sentimentality and vulnerability. Other members of the movement treat them with contempt.
Purple. People who prefer this color are characterized by delicacy and spirituality. Their character is calm, as is the driving style.
Silver. This shade is considered a sign of sexuality.
These are the primary colors. Other unusual, exclusive, cool shades are much less common.

Vehicle coloring affects safety in two ways. First of all, the visibility of the car depends entirely on what color it is. Moreover, this parameter changes under different conditions. Also, by the color of the car, you can guess what kind of driving style the owner has. In addition, you should consider which color is the most susceptible to theft.
White. This color can be considered as the safest for a car due to the fact that cars painted with it are clearly visible in any conditions. Moreover, due to the visual increase in objects, white makes cars even more noticeable. The exception is snowy weather, when white cars are hard to see against the background of snow. According to statistics, most often they encounter cars in black, burgundy and brown colors. White cars are not stolen very often, as they are very catchy.
The black. This color of cars, on the contrary, is the most dangerous. This is partly due to the fact that in low light, black cars are hard to see. As opposed to white, the best conditions for black cars to be clearly visible are snowy weather. Such cars are stolen quite often, but less often than silver and white ones. In many ways, popularity among hijackers is determined by class.
Gray. This color can also be considered as the most dangerous for a car. This is because in some conditions, such as rainy weather or at dusk, gray cars can be seen even worse than black ones. In addition, they are stolen more often than others, since there are more cars of this color, so they are invisible.
Red. Due to the brightness of the red cars are very clearly visible. In addition, this color creates optical illusions in motion, due to which it seems that the object is closer and moves faster than it really is. Therefore, surrounding drivers stay farther from red cars than from others. In addition, they are rarely stolen.
Yellow. Very bright, so the cars painted with it are clearly visible. However, yellow creates optical illusions that are the opposite of the effects of red. That is, a car of this color seems further than it really is. Car thieves don't want these cars.
Orange. Although this color is not so bright, the cars painted with it still stand out in the stream, so that they are clearly visible. In addition, orange stimulates the nervous system. Due to the low prevalence, the likelihood of theft is small.
Green. Cars of this color are also very visible, but it creates an effect similar to yellow, that is, it visually increases the distance. The likelihood of these vehicles being stolen is low.
light green. It is very safe, since such a car is light, therefore it is clearly visible in any light, like a white one. But, unlike him, light green cars are better visible in snowy weather.
Blue. It is very close to green in terms of safety and creates the same visual effect of increasing the distance. Such cars are rarely stolen, but more often than green, yellow and red ones.
Blue. Unsafe, as it is difficult to understand. The likelihood of blue cars being stolen is low.
Brown. This color is close to black, that is, the cars painted with it are almost as poorly visible in low light conditions and are clearly visible only in snowy weather. Also uninteresting to hijackers.
Pink. In terms of visibility in various conditions, it is close to a light green color, as well as in terms of theft probability, therefore one of the safest color options for cars.
Purple. In good lighting conditions, cars of this color stand out in the stream, but at dusk they become close to gray in terms of visibility. Almost indestructible.
Silver. This light color is clearly visible in all conditions, except for rainy weather. Such cars are very popular with car thieves, as are gray ones.

In this aspect, it is mainly considered which color is the most easily soiled.
White. Very brand. Any pollution is noticeable on it, so white cars quickly lose their visual appeal, especially in damp conditions.
The black. Also easily soiled, however, unlike white, in dry conditions, since dust is especially visible on it. In addition, black well shows all the defects of the paintwork. Finally, such machines get very hot in the sun.
Gray. On the contrary, it is the most practical, since slight dirt and minor defects are almost invisible on it.
Red. Not very practical, as it is characterized by a tendency to burn out in the sun.
Yellow. On such machines, dirt is clearly visible, but dust is almost invisible.
Orange. Close to yellow, but better as it's darker and the dirt is a little less visible.
Green. Not very practical. Reveals both dirt and dust.
light green. Close to yellow.
Blue. Close to green.
Blue. Very practical, as it weakly shows both dust and dirt.
Brown. Similar to dark colors, except lighter shades are better because dust is less visible on them.
Pink. Close to yellow.
Purple. Similar to blue.
Silver. Similar to gray, therefore also the most practical color.

To the question: “what is the best color to choose?” - it is impossible to answer unambiguously, since many are guided, first of all, by preferences. In addition, buyers of used cars initially do not have a choice, but repainting allows you to choose any shades, including unusual ones that are not available when buying a new car. If you are interested in practicality, it is better to choose gray or silver. From the point of view of safety, light green, orange, red colors are better. To protect yourself from theft, you should choose unusual, exclusive, cool shades. In this sense, it also matters what class the car is. 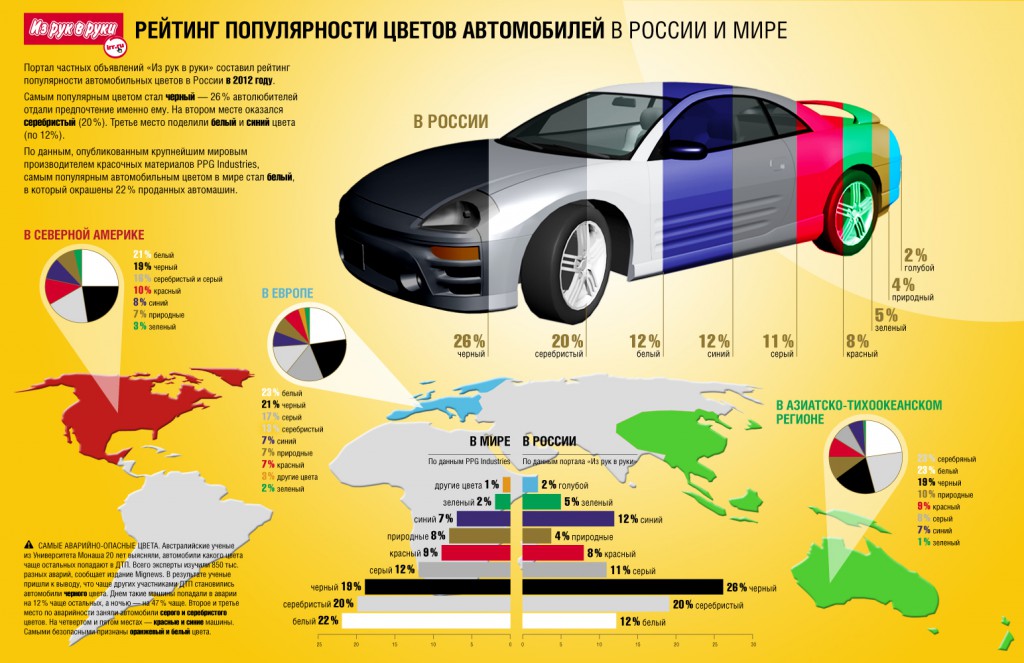