What can be the benefit of using perforated film for car window tinting?

Recently, self-adhesive perforated film has become widespread, reviews of which are extremely contradictory. There is a heated debate about whether this material can be used to tint car glass and what kind of light transmission it has. A distinctive feature of such a film is the presence of a large number of small holes over the entire surface. On one side, you can easily apply some kind of drawing or inscription, and on the other, it will be transparent.

Perforated film came from the advertising industry, where it is successfully used for application on shop windows. Large banners are arranged on a similar principle, which cover the buildings under restoration and even various existing administrative and office buildings. From the outside, the observer sees only the advertising composition, and the workers located inside practically do not notice that their windows are covered with something and can easily see what is happening on the street.

Typically, perforated film is 50% evenly filled with small holes having a diameter of 1.2–2.0 mm. The outer side of such a film has a white color and it is intended for drawing a picture, and the inner surface is painted black. For this reason, from the inside of a car, it will look like tinted glass. Such materials are produced in various modifications, some of which can be glued onto curved car windows without any problems.

Drawing on such a material is applied by inkjet printing, which allows you to get a high-quality multi-color image. After the pattern is printed, it is dried and laminated, which allows it to retain its original appearance for a long time and protects the perforation from moisture.

It should be noted that, unlike conventional tinting, perforated film is glued from the outside of the car. 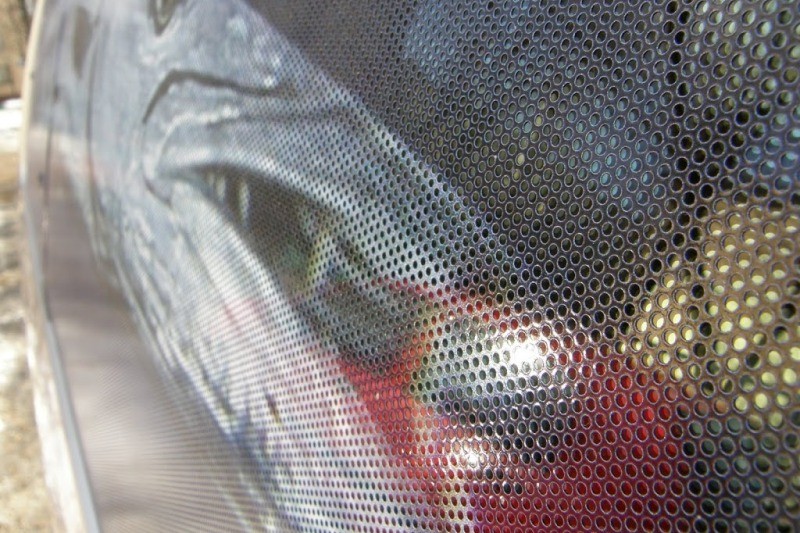 Which glass can be glued perforated film

Despite certain sellers claiming that such material is completely transparent, there are serious doubts about the veracity of such words. The most serious manufacturers say that perforated film has a light transmission in the range of 40-60%, which is most likely true. For this reason, such material is perfect for car windows, the strong dimming of which will not affect the driver's view. It is not worth acting contrary to the requirements of traffic rules and GOST 32565-2013, which establishes new tinting rules from January 1, 2015.

If the car has two rear-view mirrors, then the perforated film installed on the rear window of the car will not violate any rules and will be absolutely legal.

If you try to install the material on the windshield, then this is unlikely to delight the traffic police, and their measurements will show that the light transmission does not comply with GOST.

Some time ago there was a very heated and long dispute between supporters and opponents of perforated glasses. Some recommended them for vision correction, while others denied the usefulness of this device. The perforated film used for cars is very similar to these glasses. They are made of black plastic covered with a large number of holes. If you put them on, the feeling will be very similar to being in the interior of a car, completely tinted with perforated film. It is known that such glasses have helped many, but there is also no doubt that walking in them for long hours is harmful to vision - the eyes get very tired. 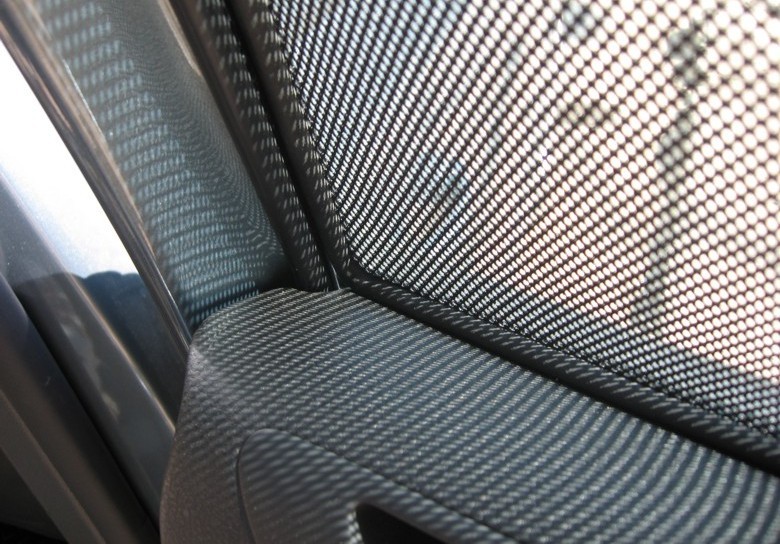 The driver will feel the same way if he sits for a long time in a darkened cabin. Therefore, even if it is possible to make a truly transparent perforated film for cars with a light transmission capacity of 80–90%, it is not worth tinting all the windows of the vehicle with it.

Perforated film is interesting not so much as an element of tinting, but as part of the design concept to create a unique look for the car. Of course, you can use it for its intended purpose - for advertising. You can conclude an agreement with a company, place its contact information, picture or slogan and earn money on it. This is a good option for those who daily drive for long hours on city streets, catching the eye of a large number of people. But you can do it differently. If the car is decorated with airbrushing, then on the perforated film, you can make an addition to the main pattern, which will undoubtedly decorate the vehicle.

To this day, a large number of cars drive on the roads, the rear window of which is decorated in this way. With a little imagination, searching for the right picture on the Internet or creating your own drawing, and using an inkjet printer, you can create a cool masterpiece that is easy to place on a car on your own. And the effect of tinting the rear window provided by the film will be an additional bonus to the stylish design.

Work with the material should be in a dry and warm room. Manufacturers recommend gluing the film on car windows at a temperature not lower than +10 °C. Therefore, the vehicle before processing, especially in winter, must stand in a heated garage for several hours. In this case, adhesion will be maximum. Before the perforated film is glued to the car, the windows must be thoroughly cleaned and washed. It is recommended to use solvents based on isopropanol for this purpose.

After washing and cleaning, the car windows are wiped dry with a soft, lint-free cloth. Perforated film must be laminated on the side of the pattern.

If this is not done, then the material will sharply lose its transparency after washing or rain, and the image quality will quickly go to zero. The protective layer should overlap the edges of the film by approximately 10 mm on each side. Lamination is carried out in a cold way on special devices.

The basic rules for gluing film to glass are as follows:

Violation of the last three conditions can lead to premature settling of the material. It is also not recommended to wrap the film over the edge of the glass, as it will quickly abrade in this place. If for some reason some joints are not covered with laminate, then you can pick up a transparent sealant and close the gap with it.

It certainly looks very stylish! Haven't heard of this one! If it needs to be glued to the outside, how does the film react to the weather? Will rain and snow do anything to her? Is it durable?

They'rs nothing like the relief of finding what you're looking for.

Yes, it has been holding up well for two years, now I ordered a new one on alik, I really like the price of about 800. It’s a good idea because I don’t want to see what’s in my trunk, but it doesn’t interfere with the rear view at all, it’s almost invisible. zafire

Something new, I have not come across such a tint yet. If it is glued outside the glass, then it is subject to mechanical damage. Probably means durable. I'll have to try the rear window.

What appeals to me about perforated tinting is that you can put a pattern on it!

With such tinting, the car looks expensive and presentable, but you often have to argue with the traffic police.

And if the rear window is heated, what will happen to the film?