Applying a tint film on car windows is not only aesthetic, but also functional, so this type of external tuning is very common. Next, we consider tinting a car with Infiniti film.

The main parameters of the tint film are quality and light transmission. Quality is determined based on cost and manufacturer. The highest quality options are considered from the United States, and the least - Chinese. You can consult on this issue with the seller. As for light transmission, this parameter is chosen in accordance with the law or with personal preferences.

To cover the car windows with a film, you will need tools and materials such as a hair dryer, a knife, a ruler, paper napkins, a spray bottle, forcings of various hardness or a rubber spatula, sponge, scraper. 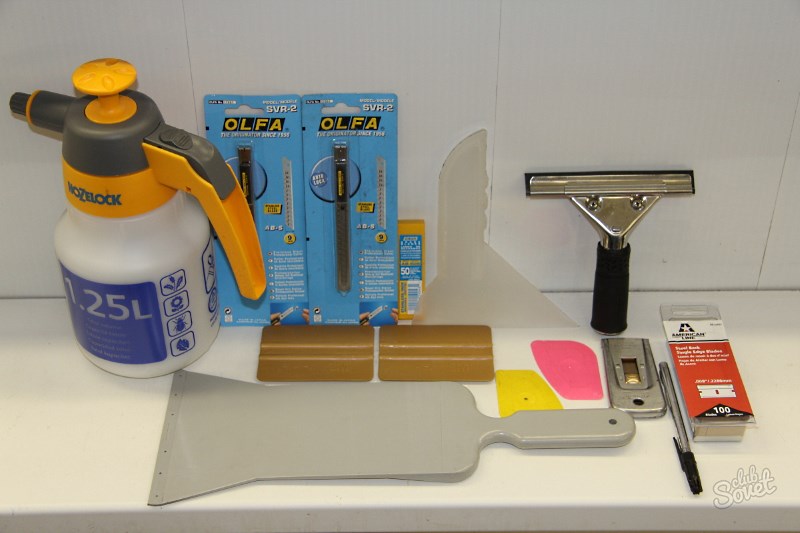 Beforehand, it is necessary to clean the windows of the car by washing with a soapy solution, which is applied with a spray.

High-quality application of a tint film is possible provided there are no glass defects.

Next, proceed to the pattern of the material. First you need to determine the adhesive layer, indicated by a transparent liner. The pattern is carried out on a roll. At the same time, fragments are cut out so that they are 2–4 cm larger in area than the car windows for which they are designed. To do this, the working surface is moistened and the film is applied to it with an adhesive layer outward, so that the lower edge is parallel to the seal and extends beyond it by about 1 cm. Using a knife and distillation, the lateral vertical sides of the film are also cut out with an exit of 1 cm beyond the seal. Finally, the top side of the film is cut out. For windshield and rear windows, cutting out the film is more difficult. This is due to their large area, as well as the bending of the rear window. Therefore, an assistant should be brought in. After applying the material to the glass, you will need to smooth it from the center to the edges, heating it with a hair dryer to remove creases. You need to work carefully to avoid damaging the seals and glass of the car with a knife. Therefore, professional tinters dismantle the glass. You can also use papyrus paper as a template by tracing it around the glass and cutting out a fragment. It is transferred to the tint film.

After that, they proceed to pasting the car windows with a film. First you need to dismantle the seals and clean the working surface with water using a scraper. Then it is wiped with rubber distillation, and the edges should be wiped with a napkin. Pasting with a film begins with the side windows. One of them is covered with a soapy solution, then removed from the pattern by 2/3 of the liner and the adhesive surface is moistened with it. Hands should also be soaked in the solution, and they should be clean, as you will have to touch the adhesive layer. Then the film is applied to the glass with the dark side inward and, making sure that it is even and that there are no gaps, the solution is squeezed out from under it from the center to the edges with a distillation, but not too hard so as not to scratch the glass. Then the dark layer is separated and applied to the inside of the glass, after wetting it. A transparent layer is applied on top. After that, the surface is smoothed, removing bubbles. At the end, the glass with the glued film is blown with a hair dryer for drying.

The rear and windshields are glued in the same way. Only you need to work more carefully so as not to damage the heating filaments, and hard distillation is used to remove the solution.

Within two days after work, seals are not installed and windows are not lowered.